On Being a Male Ally: Why I Attended the Lerners LLP Women’s Symposium

I recently attended the Lerners LLP Women’s Symposium and had the privilege of hearing prominent criminal defence lawyer, Danielle Robitaille, speak about what she called “The Passion Advantage.” Now, one might ask why would I, a man, attend a women’s symposium. Fair question, I suppose, but I’ll come to that later. First I want to talk about what I experienced and what I learned.

As a man, I was certainly in a very discreet minority among the attendees. I didn’t feel unwelcome or ostracized though, but rather a sense of welcome appreciation that a man would risk the possible awkwardness of attending a women’s symposium in order to join the conversation about the issues and concerns of his female friends and colleagues. I had the distinct pleasure of observing my wife, friends, co-workers, and other amazing women from my community connecting and sharing with each other in a space where their passion and potential was encouraged and celebrated. And I had the privilege of hearing a fiercely passionate and inspiring female lawyer, who is rising to the top of her field, tell her story and deliver a message that’s important for all of us to hear and understand.

Danielle’s key note was insightful and thought provoking in so many ways. She raised issues which, as a man, I had not considered. These include, but are not limited to, that: women traditionally under-promote their talents, efforts, and accomplishments; women are more likely to credit their male colleagues for wins and successes; women are more often “voluntold” and more likely to volunteer for “non-promotable” (lawyers read non-billable) tasks and projects; women receive non-specific, unhelpful feedback on their work, which limits their ability to grow and improve; far more than their colleagues who are fathers, mothers are encouraged to focus on balancing and prioritizing family and to adopt a less than full-time working arrangement after having children.

All of this is not even to mention the overt sexism, discrimination, and harassment which is still far too prevalent in the modern workplace. Although Danielle’s talk was directed toward women (99% of her audience was female) and the strategies she provided for addressing these issues were from a woman’s perspective, it was immediately obvious to me that as a man in the workplace, I have a role to play as well.

This brings me back to the question of why I, as a man, would attend a women’s symposium. I sit on the Board of Directors of an incredible organization called Changing Ways, whose mission is to help men end violent and abusive behaviours against women and children: by disrupting violence and abuse, we play a pivotal role in contributing to the safety of women, children and men. It is important to remember that physical violence and sexual violence are only the most extreme forms of a problem that remains all too pervasive: widespread and systemic discrimination, harassment, and violence against women. Whether intentional or unconscious, these types of perceptions, comments, and behaviour are harmful to all women and hinder women’s abilities to thrive in their personal and professional lives.

But I don’t think that it’s fair to characterize this as a “women’s issue”; nor is this problem going to be solved at women’s symposiums, as important as they are, or exclusively by women, as powerful as they are. I really think that these issues are everyone’s problem to solve. What’s more, I think that men bear an important responsibility to take ownership over our own contributions to this unfortunate reality and to find ways that we can all be better allies to our female friends and colleagues, superiors and staff, mothers, sisters, and wives.

So I want to congratulate my female colleagues, mentors, and friends for this incredible initiative, and encourage you all to continue on this noble path. And to my male colleagues and friends, I would invite you to join me in doing what we can on this path as well, be an ally, and to attend and support the Lerners LLP Women’s Symposium next year. 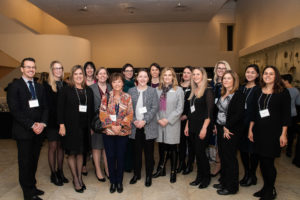