How Can We Help? We’ll be happy to match you to the right qualified Lerners Lawyer.
Lerners Partner Faisal B. Joseph Receives Honorary LL.D 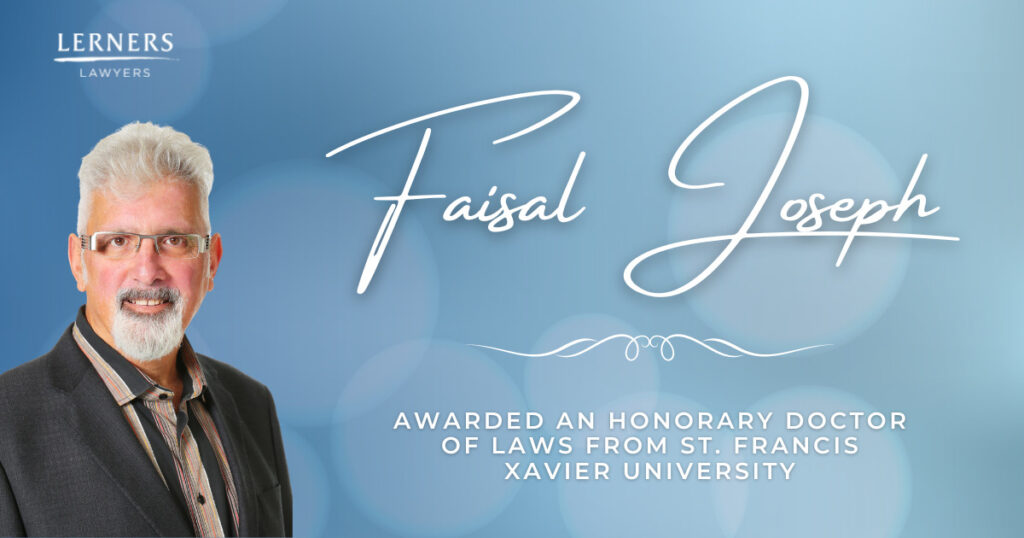 We’re pleased to congratulate our partner Faisal B. Joseph, who had an Honorary Doctor of Laws conferred upon him by his alma mater, St. Francis Xavier University, in recognition of his long-standing, fearless commitment to justice, service to the Canadian Muslim community, and to the community at large, at Fall Convocation held on December 4, 2022.

A proud alumnus of St. Francis Xavier, Faisal started his legal career in the Maritimes before joining our London office in 1994. For more than 35 years, he has been a determined champion for civil rights, an indomitable advocate for justice and understanding, and a community activist renowned for combatting prejudice and promoting inclusion. Some highlights include:

He has also served on the board of directors of numerous of charitable organizations including St. Joseph’s Hospital, Childreach, the United Way, Lawyers Feed the Hungry, and the Canadian Cancer Fund, to name a few.

“Faisal has made immeasurable contributions to the profession of law, and to the community throughout his career”, says Yola Ventresca, Managing Partner “We are incredibly grateful for his leadership over the years, and are proud to celebrate this incredible recognition of his passion and dedication to justice, understanding and inclusion with him.”

Congratulations Faisal, on this outstanding achievement!

Back to News Find a Lerners Lawyer Office Details